Press Button and Jump to: 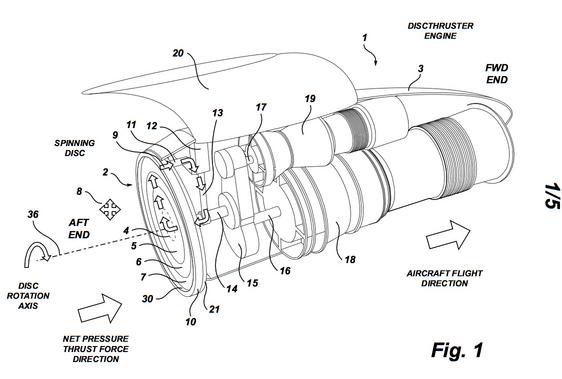 Figure 1 - US patent application  ​excerpt showing under the wing attachment of DiscThruster disc being spun by two modified off -the-shelf turboshaft engines. Both engines are used for takeoff, single large engine for climb, and smaller engine for cruise, matching power requirements and maximizing fuel efficiency

To totally new DiscThruster 2.0 includes a closed loop water turbine and fluid collection annulus, located radially outward and circumferentially around the disc circumference. The water turbine accepts radially outflowing fluid that has previously been used to create pressure thrust. By expelling it through numerous choking nozzles.

Running a little slower than half the speed of the disc, the water turbine pulls off fluid momentum energy and slows fluid flow down to where the outer annulus can gather and recycle fluid back to the DiscThruster. Creating a closed loop pressure thrust propulsion with zero momentum thrust. Momentum energy gained by the water turbine is added back to the DiscThruster main shaft through a gear drivetrain, adding overall system efficiency.

After the previously choked fluid exits the numerous rocket nozzles, high rotational speed of the disc impart a tangential velocity. Fluid channels force the fluid out the disc circumference at a 90-degree angle from the centerline (see video clip illustration). Such that its momentum thrust is canceled in the centerline direction. This is considered an "open loop" system because fluid then leaves the control system.​