2.  The hot gas rocket nozzle was invented by the Greeks in 100 BC and first used in a weapon by the Chinese in 1232 AD. This basic design is used today for every rocket engine and motor. As hot gas passes through the minimum throat area a sonic "choke" forms. Gas then expands and accelerates downstream in the nozzle section, finally passing across the nozzle exit plane and out to the atmosphere at very high velocity. From the pie chart you can see Momentum Thrust dominates. Also, kinetic energy leaving the nozzle (control volume) is very high. 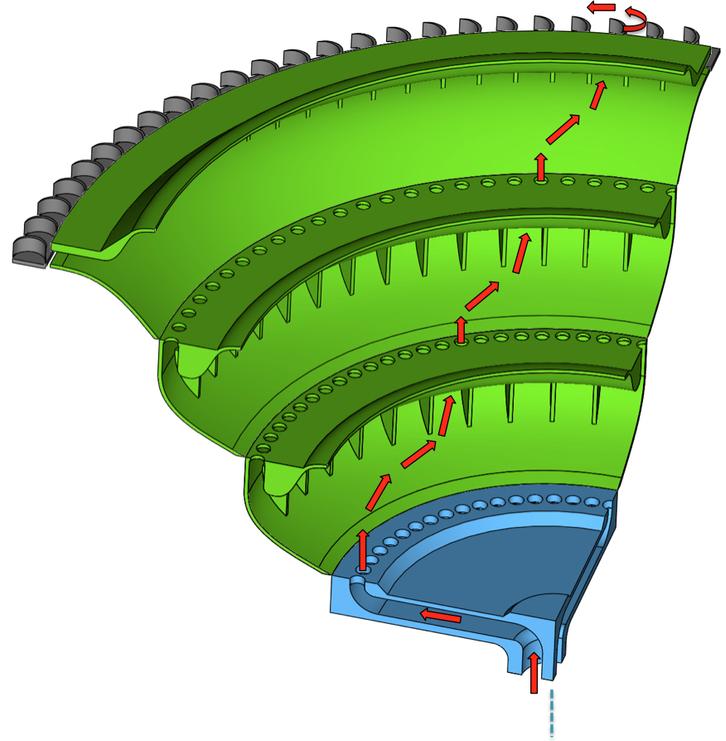 3.  The two-phase fluid DiscThruster rocket nozzle invention uses the same rocket equation as the hot gas rocket nozzle, but does the opposite by maximizing Pressure Thrust and minimizing Momentum Thrust (see pie chart) for a disruptive high efficient propulsion system. It has no expanding nozzle section that would speed up fluid velocity. Rather, it uses a two-phase fluid (e.g., water mixed with air) that sonically chokes at the end of the nozzle at the lowest practical velocity, minimizing Momentum Thrust. Kinetic energy leaving the system is only about  0.01% of the hot gas rocket nozzle example.

Press Button to Jump to: 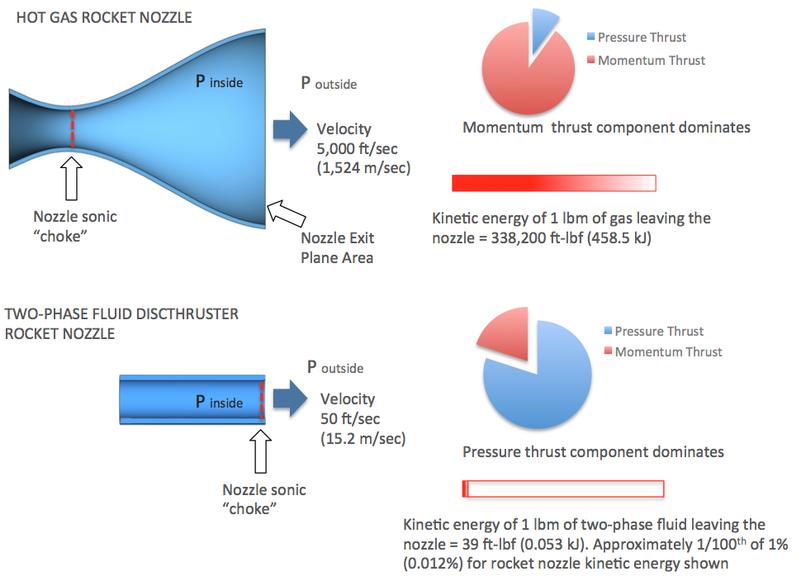 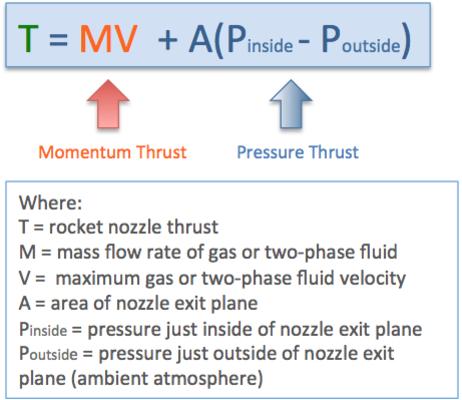 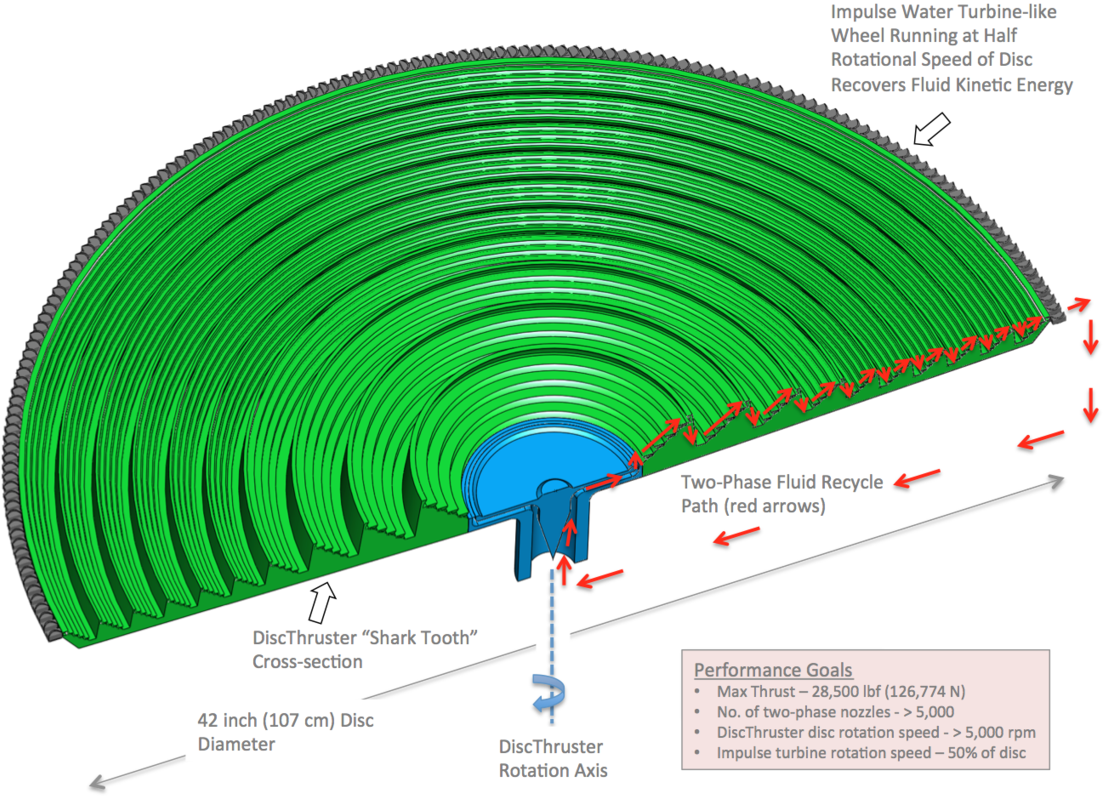 1.  DiscThruster propulsion is based on the Rocket Equation. It tells us that rocket Thrust is a sum of both Momentum Thrust (mass x change in velocity) and Pressure Thrust (differential pressure across the nozzle exit plane x area of the exit plane).

4.4  Fluid flies until it intersects the scoop-like radial finned  circumferential cavity "ring" where it is again pressurized and directed out a series of sonic choking nozzles. This cycle is repeated for 50 or more "rings".

4.5 After passing through the last outer ring, fluid is directed to an impulse like water turbine traveling at about half the angular velocity of the DiscThruster disc. The two-phase fluid tangential direction is reversed nearly 180 degrees by the impulse like turbine, causing its velocity to approach zero. Using this approach virtually all of the fluids kinetic energy (less losses and residual velocity) is recovered and recycled back, via a geared transmission, to spinning the DiscThruster disc.

​5.  Shown below is a (artist rendering only, not necessarily technically correct) half cross-section of a 28,500 lbf (126,774 N) thrust DiscThruster disc concept (green).  Two DiscThruster engines of this size would power Boeing 737 and Airbus A320 class aircraft. The 42 inch (107 cm) diameter disc exhibits 50 concentric "rings" containing thousands of two-phase choking nozzles. Fluid (red arrows) enters the central hub (blue) and traverses a series of "shark tooth" concentric rings until it reaches the outer ring circumference. Located at the outer circumference is an impulse water turbine-like wheel (gray), running at half the rotational speed of the disc, in the same direction. It receives and recovers fluid kinetic energy, redirects it via a transmission, back to the central hub to spin the disc. In one embodiment, two coupled modified off-the-shelf (MOTS) turboshaft engines (both used for takeoff power while only the smaller one is operated for high altitude cruise to maximize efficiency) spin the DiscThruster Disc with disruptive low specific fuel consumption (SFC) over modern turbofan and open rotor engines. Use of available MOTS turboshaft engines greatly speeds development.

4.2 Two-phase fluid (red arrows) is introduced to the blue hub. It spins up and is pressurized by centrifugal forces (like a centrifugal water pump).

4.3 Fluid then sonically "chokes" and exits the two-phase rocket nozzles, flying in an upward and tangential direction (at right angles to its radius). Each nozzle has a clear view of the sky and local exterior exit plane ambient pressure. Flight time is around one millisecond.​